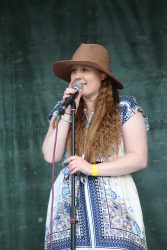 Where do I live: Castle Hedingham, Essex

Where am I from: Hertfordshire

When did I join the band? Late 2018 (can’t remember when exactly). I used to sing as a duo with Chris before that so the date’s a bit vague.

Pet’s name: Ironically, I have a cat named Garfield because he is fat, ginger and lazy! Unfortunately, he doesn’t live with me as we can’t have pets! But he’s very happy with his sister at my mum’s.

Car’s name: Cindy-Lou. My car is my pride and joy! Took me 8 attempts to pass my driving test, but she was definitely worth all the money, effort and stress!

Favourite musician/band – Oooh – this is a toughie! I think I’ll have to go with Shania Twain and The Lighthouse Family.

Favourite song – Another toughie! I can’t choose just one! I’ll pick one from my favourite artists which will have to be ‘Free’ by the Lighthouse Family and ‘Whose Bed Have Your Boots Been Under’ by Shania Twain

Favourite sportsman/woman – Not the biggest sports fan but I used to have 3 rabbits named after Manchester United players and the manager so I’ll go with them! Ole (after Ole Gunnar Solskjaer) Eric (after Eric Cantona) and Fergy (after Alex Ferguson). I was a massive Man U fan when I was younger, but unfortunately couldn’t saying ‘Man United’ properly, so I used to run around shouting “Get Knotted!”

Stupid thing I admit to doing – Well there’s certainly been a few things I’ve done in my life! I would have to say one of them was when I went shopping and I was looking for some make-up remover wipes, I picked up some that appeared to be stuck together. I was wrestling with these wipes for quite a period of time, trying to peel them apart, to then realise, there was a sign on them that said ‘twin-pack’. Bearing in mind, that was at the till, so the whole time I had this lady staring at me fighting with a double pack of wipes. Doh!

Dream Instrument – I’ve always wanted to be able to play keys and guitar. I have a keyboard and will be starting to have lessons. Maybe one day I’ll learn guitar too!

Interesting facts about me: When I was younger, I was deaf in one ear so I wasn’t very clear at speaking and pronouncing my words. I wasn’t very good at singing at all, but I didn’t care. Singing was my thing and I would do it everywhere whether people liked it or not! I used to sing to my elderly neighbour through the fence (I can’t say that the other neighbours appreciated it!) and even though I really did sound awful, I absolutely loved singing to her. I eventually had grommets fitted and my hearing was fixed. Everything became easier after that, speaking particularly which then my voice followed.

I really do believe that if I gave up singing because of my hearing, I wouldn’t be anywhere near as advanced as I am now. This is why I’m a big believer in the attitude ‘you can do anything if you put your mind and soul into it’. Nothing in this world will ever stop me from singing.

Also, I share my birthday with Chris (though he’s a bit older than me).